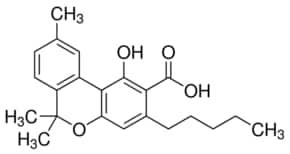 WHAT IS CANNABICHROMENE ACID (CBCA)?

Cannabichromene acid (CBC-a) is said to be the fourth major cannabinoid found in the cannabis plant. CBC-a is discovered at a higher level especially in tropical marijuana strains. It can however still be found in other strains, but not at the same levels. Unlike THC, CBCA is a non-psychoactive compound that can be further converted to cannabichromene (CBC) through the heating and aging process. The heating process which can also be referred to as decarbing or decarboxylation helps to convert the CBCA into consumable CBC that binds itself with C-receptors in the human body.

The secretion of CBCA by the cannabis plant starts during the early seedling stage. This is to tell that CBCA starts to develop in young seedling of the cannabis plant before the plat starts to form tetrahydrocannabinol (THC). Two research doctors, Yehiel Gaoni and Raphael Mechoulam of Hebrew University were able to discover some series of phytocannabinoids in the 1960s. The duo discovered and successfully isolated CBC in 1966.

As stated earlier, CBCA is converted to CBC through the process known as decarboxylation. This can occur naturally over time, and likewise, if the compound is exposed to heat. The CBCA loses a single molecule of C02 and becomes CBC.

There is no much research when it comes to the compound CBCA, but this does not stop it from being recognized for its wide range in medical uses. Seeing that CBC is the consumable form of CBCA, it is shown to be more effective than THC and CBD in treating stress and anxiety.

HOW DOES IT WORK?

Research concerning the medical use of CBCA is still ongoing, but here are some of the therapeutic benefits of CBC;

Stress and anxiety-related issues may occur as a result of trauma that someone might have faced. Research shows that the use of CBC with other cannabinoids helps to alleviate mood even better than THC.

CBC according to a study done in 2006 proves to be the second most effective cannabinoid at preventing the growth of tumors.

A study carried on mice in 2013 proves the effectiveness of CBC on cell growth. Not only that, contrary to what people think about brain growth, but neurogenesis also does not end thanks to CBC which ensures the growth of brain cells.

Pain is one of the reasons why many people use drugs. CBC according to research helps to reduce inflammation without coming in direct contact with any of the cannabinoid receptors. Some even suggest that its effectiveness in reducing inflammation is stronger than that of other cannabinoids.

BACK TO CANNABINOID LOCATOR