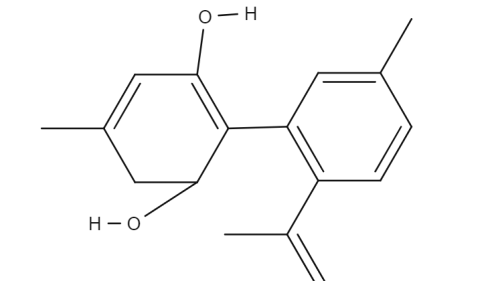 Of the over 120 natural cannabinoids identified in Cannabis plant, seven have been classified as CBD-type compounds including CBD. All of them have the same absolute configuration than CBD; they are 5′-methyl-2′-(prop-1-en-2-yl)-1′,2′,3′,4′-tetrahydro-[1,1′-biphenyl]-2,6-dioles retaining the trans-(1 R,6 R) configuration. Cannabidiolic acid (CBDA) and cannabidivarinic acid (CBDVA-C3) are C3′-carboxylic derivatives, whereas cannabidiorcol (CBD-C1), cannabidiol-C4 also named as nor -cannabidiol (CBD-C4), and cannabidivarin (CBDV) differ from CBD by the length of their C4′-side chain. Cannabidiol monomethyl ether (CBDM), the C6′-methoxy CBD analog, was also isolated from the plant. Despite the potential therapeutic interest of these naturally occurring CBD derivatives, only a few related pharmacological studies have been reported.

The first discovery of an individual cannabinoid was made, when British chemist, Robert S. Cahn reported the partial structure of Cannabinol (CBN), which he later identified as fully formed in 1940. Two years later, American chemist, Roger Adams, made history when he successfully isolated the first cannabinoid, Cannabidiol (CBD). His research is also responsible for the discovery of Tetrahydrocannabinol (THC).

Cannabidiorcol (CBD-C1) as one of the naturally occurring derivatives of Cannabidiol (CBD) has many potential therapeutic interest but despite the interest, there exist only a fragment of pharmacological studies on it. Nonetheless, that much has not been reported concerning it does not mean it won’t gain attention in the future.

Members of the CBD class of cannabinoids bind weakly to CB1 receptors and act as an “inverse agonist” at the CB2 receptors (Ligresti, et al, 2016). A molecule that can combines with a receptor on a cell to produce a physiological reaction is referred to as an agonist. An inverse agonist, then, is an agent that aids the combination with the receptor to bring about a counter response to what would have occurred naturally. This explains part of the impact of CBD in the human body system. One of such impact is the moderation of THC.

Generally, Cannabidiols (CBDs) act as anti-depressant, anti-anxiety, anti-inflammatory and antipsychotic agent and this can be said to be true for Cannabidiorcol (CBD-C1) since it belongs to the family too. However, beyond the list, Cannabidiorcol (CBD-C4) is capable of acting as an anti-cancer, anti-nausea and antioxidant agent.

Cannabidiorcol (CBD-C1) as a member of Cannabidiol (CBD) does not have intoxicating and psychoactive abilities and can be used for neurodevelopmental diseases.

BACK TO CANNABINOID LOCATOR